Dixie chick goes for an adventure... 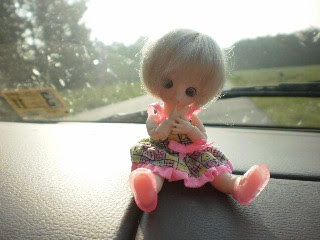 Yeah, it's me again...Dixie Chick brownie here. That's me sitting on the dash of Mr. Chris' van on Monday...and me n' Gracie went for an adventure...at least I call it that. Gracie got her own seat in the back. Miss Lisa said I should sit on the dash so I could see the great view...it was great... 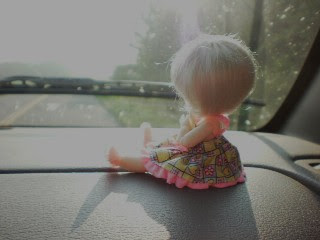 Boy was that sun bright ! 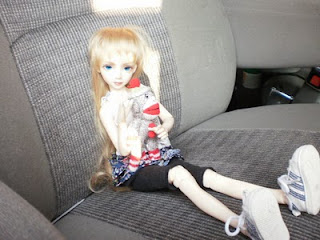 Gracie didn't think so..but then, she sat in the back seat of the van...even took that new sock monkey Miss Lisa got her. I like sock monkeys, but he's too big for me to drag around.
As I said, we were going on adventure....to a place called Warsaw, that is near where Miss Lisa & Mr. Chris live. It's far far away in the country. 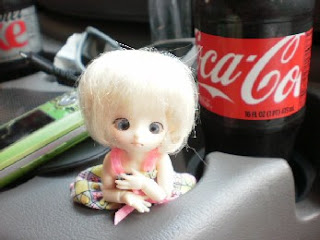 I eventually ended up riding in the console where the cokes ride, by the cell phones, keys and other human paraphanalia. They have alot of junk they carry! 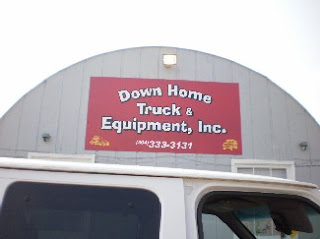 Yep- the sign REALLY says that. Mr. Chris needed a new truck for his business, LeoPaul & Associates. Mr. Chris works on huge, humongous, ginormous, well, you get the picture ---BIG Boilers (those are the things that give factories their heat ). Well, 'Down Home Truck & Equipment' is where the place was in Warsaw. Mr. Chris had found his truck! 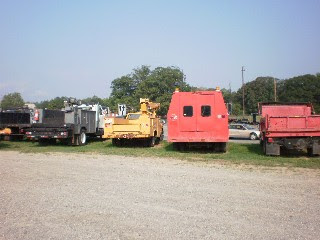 See that big red one, second from the right? Well, that is Mr. Chris' new truck. Miss Lisa is going to take pics of the rest of it. It is big- and has all kinds of marvelous buckets for the tools Mr. Chris carries about with him to work. Big ole dirty greasy tools...oooh. I hate getting dirty. 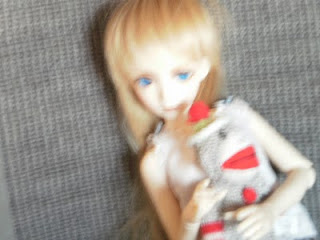 Gracie just stayed in the back of the van. Party pooper.
Then we went on to another place buying more stuff for Miss Lisa's shop-- some sort of warehouse that she was real excited about. 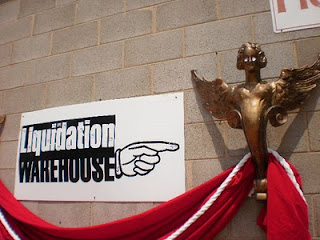 Liquidation warehouse- Miss Lisa wanted those big gold angel looking things with wings that the red drape was hanging on..but they were so big! We stayed in there forever and forever....at least I stayed in Miss Lisa's purse. She doesn't like to leave me in the car. Again, Gracie stayed in the car...until we went to Walmart....then Gracie got some of hte new LIV girls clothing- bummer! she got a new outfit! 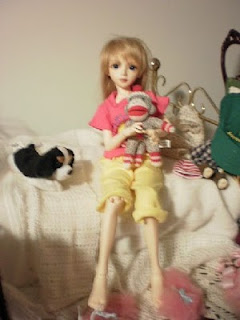 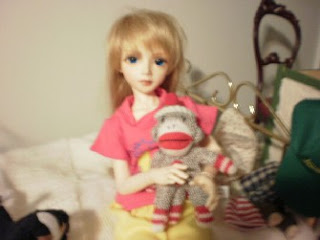 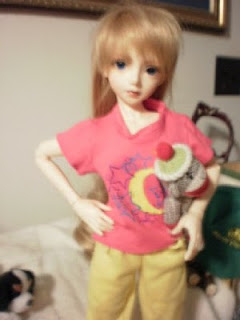 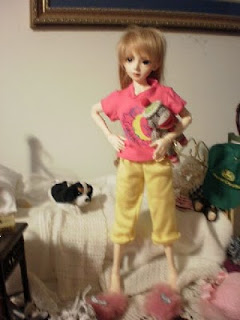 So here is Gracie's new outfit. Pajamas- again! Gracie said she didn't like the fuzzy slippers, they made her feet itch. She doesn't know how much she is going to like this new mouse bjd that is on its way from Denver Doll Emporium, but I am looking forward to meeting her. She is a Dollfactory Bobo 2nd edition. Hopefully she will work in the Mickey Mouse diner that Miss Lisa is collecting all of the Disney Rement for....but she may be Maizie & my new teacher....or the new Doormouse in the Alice in Wonderland diorama Miss Lisa is also collecting for. When she brought Gracie's outfit, there was ANOTHER doll box in the bag...and it looked like one of those big headed Moxie girls dressed as Alice!
Well, that is our adventure...more to come when Miss Lisa gets more time on her hands to take pictures of us!
~ The Dixie Chick brownie
Posted by Lisa Neault at 12:59 PM No comments: 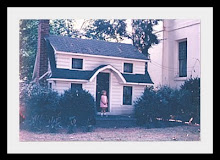